All photos were shot with an Olympus OM-1 with a 50mm F/1.4 Zuiko lens and Tri-X 400 unless otherwise noted

In March 2013, I returned to Japan for a study abroad program for four months, and for the previous seven months, I had ample time to really wet my appetite for the world of photography with my Fujifilm X100; this was a part of my 15 month hiatus from university life. Being a retro-style camera (review coming soon), the X100 offered was  effective as training wheels to ready me for the ultimate challenge–film.

Being a novice to the world of photography, I did my research and understood the interplay between ISO sensitivity, aperture, and shutter speed. Yet, up to that point, I was simultaneously enticed by the romanticism of film and its grain and fearful of the risk that each exposure could bring. With digital, every shutter release is ephemeral, as the zeroes and ones recording the data of a crappy shot could easily be deleted, but with film, object permanence suddenly became a consideration: once that shutter release was pressed, nothing could stop those photons from interacting with the silver halide molecules on photographic film, and that was terrifying.

Nonetheless, I spent months strengthening my resolve, and when I arrived in Japan, I managed to find a plethora of antique camera shops. At one local shop, I picked up the Olympus OM-1 along with the 50mm F/1.4 Zuiko lens for less than $100 USD, and right off the bat, I could tell that the build quality of this ancient camera far surpassed most modern offerings. After buying a few rolls Tri-X 400, which I read was one of the more forgiving films, I decided to roam through the streets of Tokyo, taking pictures whenever I could, as the monumental sense of wanderlust and excitement far exceeded any anxiety I had at the time.

I neither had access to a darkroom nor the knowledge to develop my own film and prints, though it is something I want to try my hands at eventually. Therefore, for the first roll of Tri-X, I relied on a local film store to process the film for me. Unfortunately for me, time in South Korea had overwritten some of my prior knowledge of Japanese, so I mistakenly had the roll processed and printed, but not scanned. Therefore, some of the images here (as noted) are pictures of pictures taken with my trusty X100. In all honesty, I’ve been too lazy to send them into a service for scanning.

Temple in Omote-Sando (Picture of Picture by X100)

One of the most fun experiences about shooting film was shooting with B+W film. I read that doing so meant training your mind to see entirely in grey scale, which I thought would be a laborious task, but turned out to be incredibly fun. I started to focus on shadows, highlights, contrast, and textures in a scene rather than color, and trust me, there are some wonderful colors in Tokyo, especially around cherry blossom season. 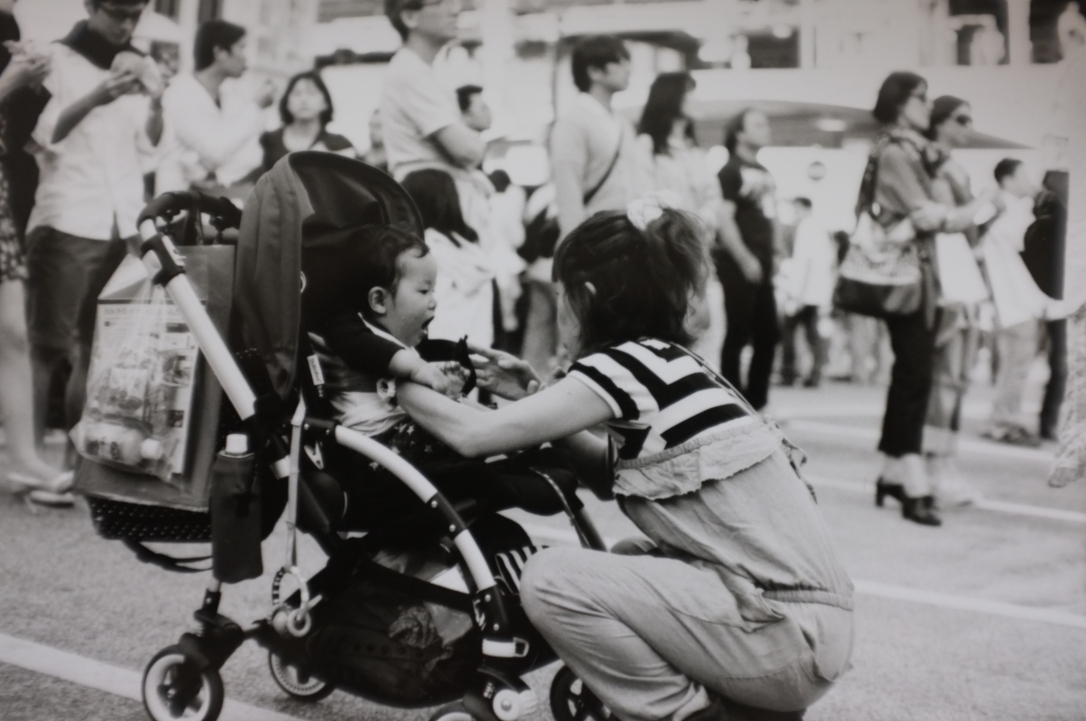 This was also my first time really shooting street photography, which also brought me great anxiety. At worst, having your photo taken randomly is a bit creepy and flattering at best. Yet, Tokyo might have been the best place for me to experiment with street photography simply because there were so many people! The city’s hustle and bustle puts New York to shame, and I found that I could rely on my guise as a harmless foreigner to shoot the denizens of Tokyo. Furthermore, I saw many hipsters with film cameras as well, which only reassured me that I did not appear as a strange stalker to people.

There is a concept in Vietnamese culture (and probably most Asian cultures, albeit in different names) called “ngại” (NGUH-AYE). Loosely translated, it refers to the negative feeling you get when you’ve burdened someone with your actions. Generally labeled as more of a “collectivist” society, I felt Japan’s culture revolved around this concept as well–people did things with other’s emotions in mind, even if they were complete strangers. It’s a stark contrast to the dog-eat-dog mentality of highly individualistic societies, and it was extremely refreshing. People cared about others and were considerate of them, even in the smallest of ways. For example, everyone stood to the right on the escalator if they were not walking to make room for those in a hurry. In fact, the only people I noticed violating this unspoken social rule were foreigners, and even then, I never saw a Japanese person tell a someone to move to the right, even if there was a roadblock behind that one person. Perhaps it’s out of fear, but I’d like to think they felt ngại. 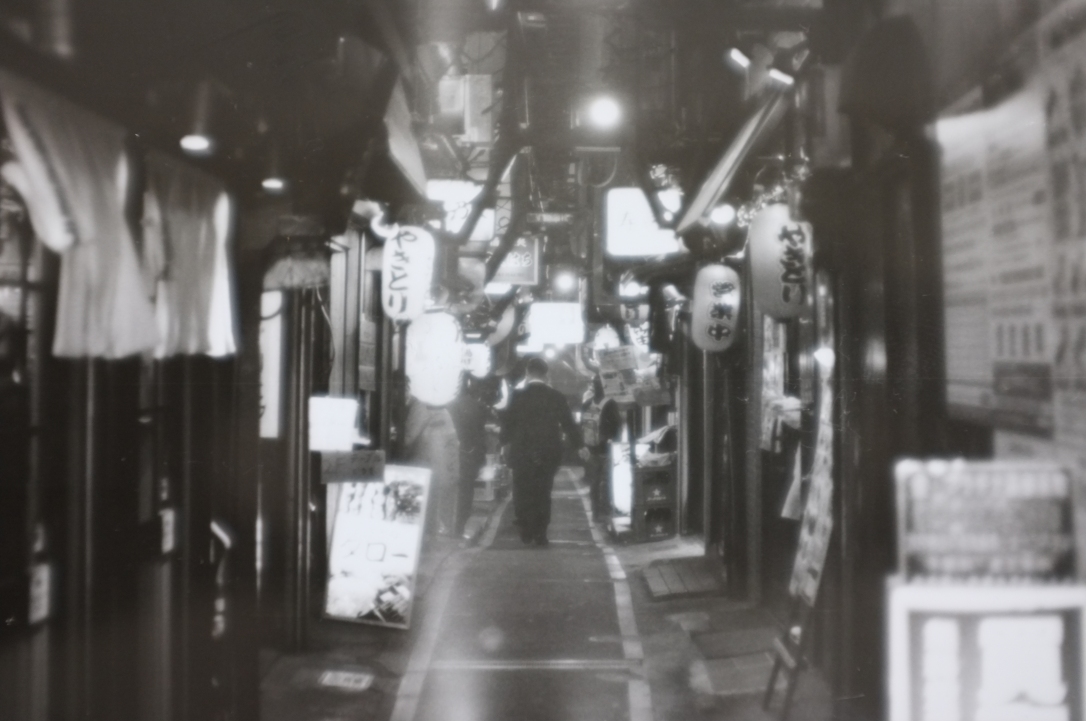 There’s a certain timelessness when a photograph is shot in monochrome. Ironically, it’s as if the lack of color causes the mind to focus more on the photo. This may be an isolated phenomenon for me, but I suspect not, given how well the film industry is still thriving despite huge advances in digital technology. Painting and drawing generally relies on the artist’s ability of creation to make art. On the other hand, photography may be the polar opposite. It relies on the photographer’s ability to omit and distort reality to turn a possibly mundane scene into art. In this sense, film will never die, as its ability to warp some aspect of reality is inherent to its DNA. Every type of film has its own unique character in how it renders, so it feels as if you’re working with something alive. Even digital sensors, though poised to accurately represent reality, cast their own tweaked renditions to allow companies to distinguish themselves from each other. 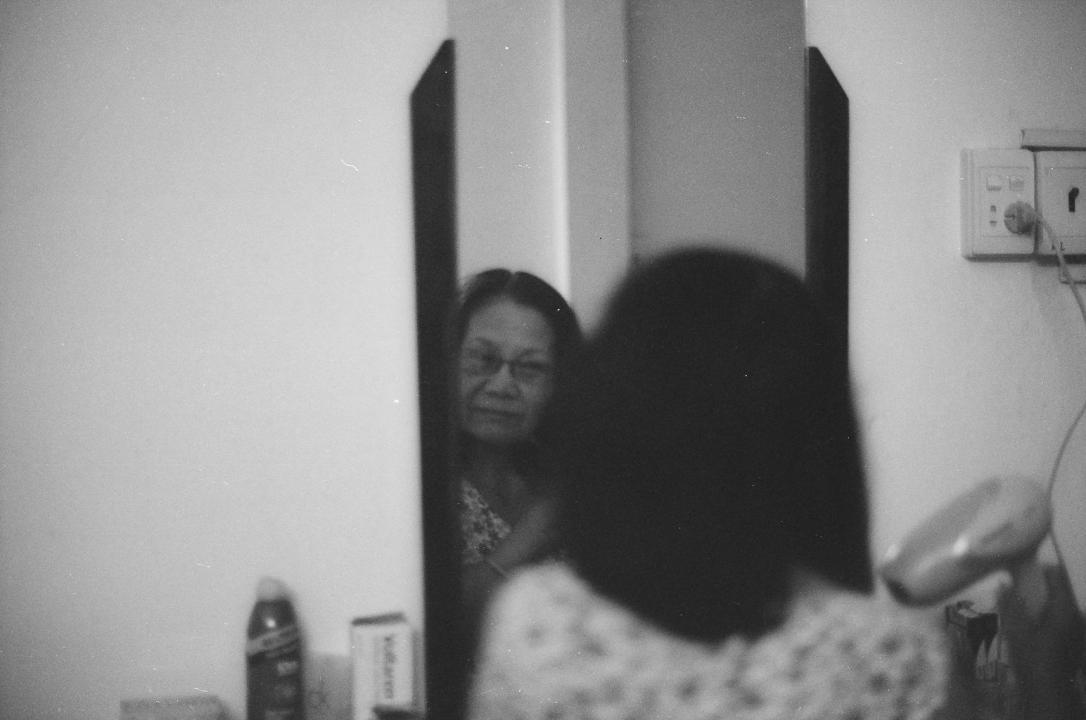 “Couldn’t you have waited for me to put on make-up?”- My Mom

But perhaps the best thing about film is that it really does force you to slow down. Admittedly, I first treated every shot as about $0.50, considering the cost of processing and everything, and that really made me conscientious of what photos to take. I later realized that this financial approach to film might not have been the best idea, as it deterred me from taking risks and going for more difficult shots, but considering that I was a college student at the time, it at least made sense. Ken Rockwell’s article about FARTing (read more about it here) before you shoot rings truer with film. Just like working with BW film, there is something about self-limitations that allows the creative process to flourish.

There’s a lot more that could be said of film photography: the lack of an LCD screen forced me to be more confident of my shots (this is probably why the Leica M-D was such a hit). The absence of reliance on electrical components felt freeing (barring the optional metering system). The physical remnant of the photo roll made the journey feel more rewarding, more so than any amalgamation of 0’s and 1’s every could on a digital camera.

Before, I could shoot hundreds of photos in a day and maybe ten percent of them would be somewhat decent, but with film, at least half of my photos were decent. And even when they weren’t so good, I could instinctively evaluate what I could have done to improve.

I waited a long time for her to look up, but to no avail, I settled for this shot. Perhaps she felt nervous or ngại.?

The high of film persisted even when I left Tokyo and visited my family in Vietnam and took a tour to Thailand. Quite lamentably, however, I became a victim of my own negligence. I wanted to try shooting a different film, so I loaded some Ilford HP5 400 ISO film into the camera only to have it go through an x-ray and be left in a very hot car for hours one day. I read about the resilience of film, so I decided to shoot with it anyways, but the results were less than fantastic, especially in the darkness of Bangkok’s street markets, which made it harder to focus. Yet, I still find myself loving the results. 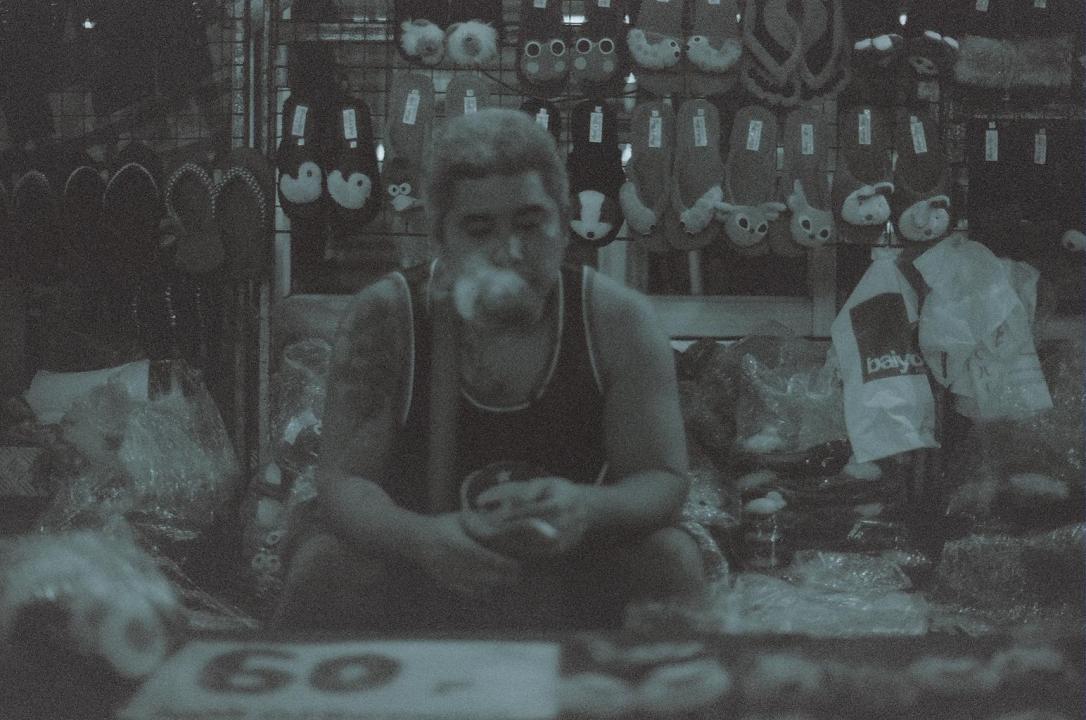 After getting back from Thailand to Vietnam, I put some fresh film into my OM-1 and proceeded to rent a moped driver for 30 minutes. As he drove around all the major sights of the neighborhood, I hurriedly tried to take photos while making sure I did not fall to my inevitable doom off the back of the moped. Below are some of the photos: 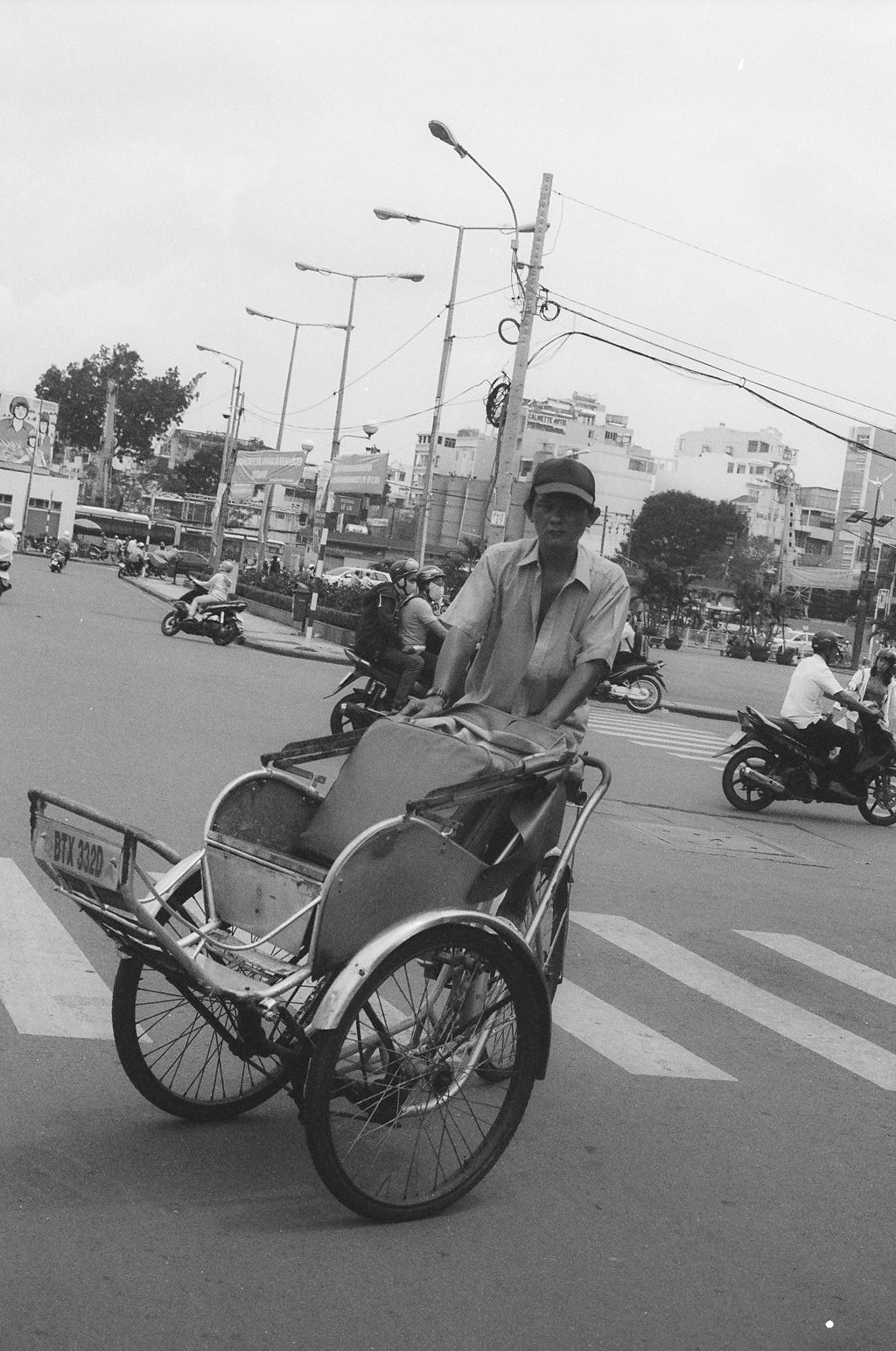 The Rickshaw Driver (shot on moped) 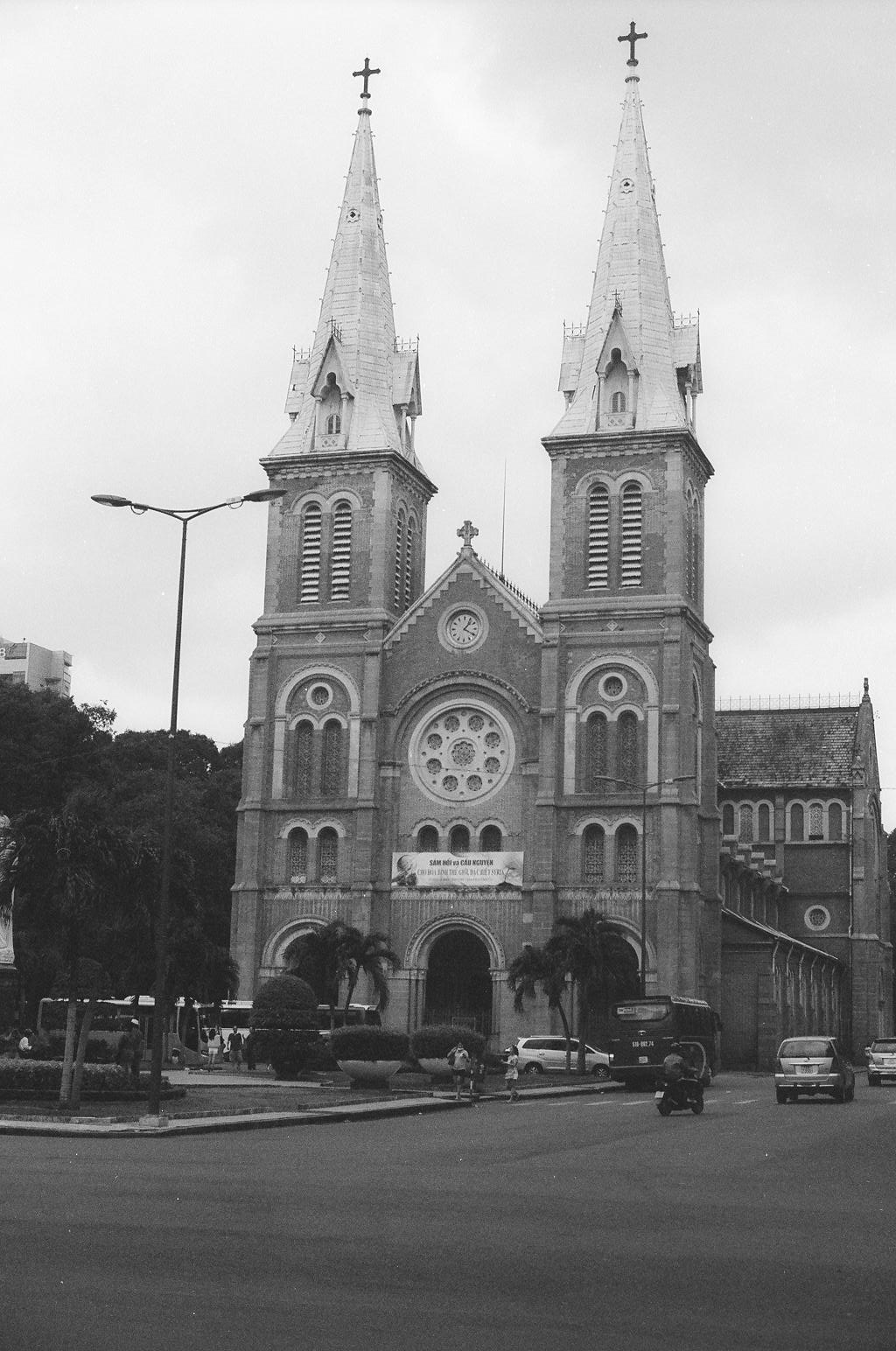 Though inconvenient, there truly is something special about film that continues to beckon both old and new photographers to its siren call. To the uninitiated, film is antiquated and expensive, and that it is. From a purely technical, pragmatic, and even financial standpoint, choosing to shoot film makes absolutely no sense; you essentially get a more costly, time-consuming, and less sharp image that deviates greatly from what you intended to capture. 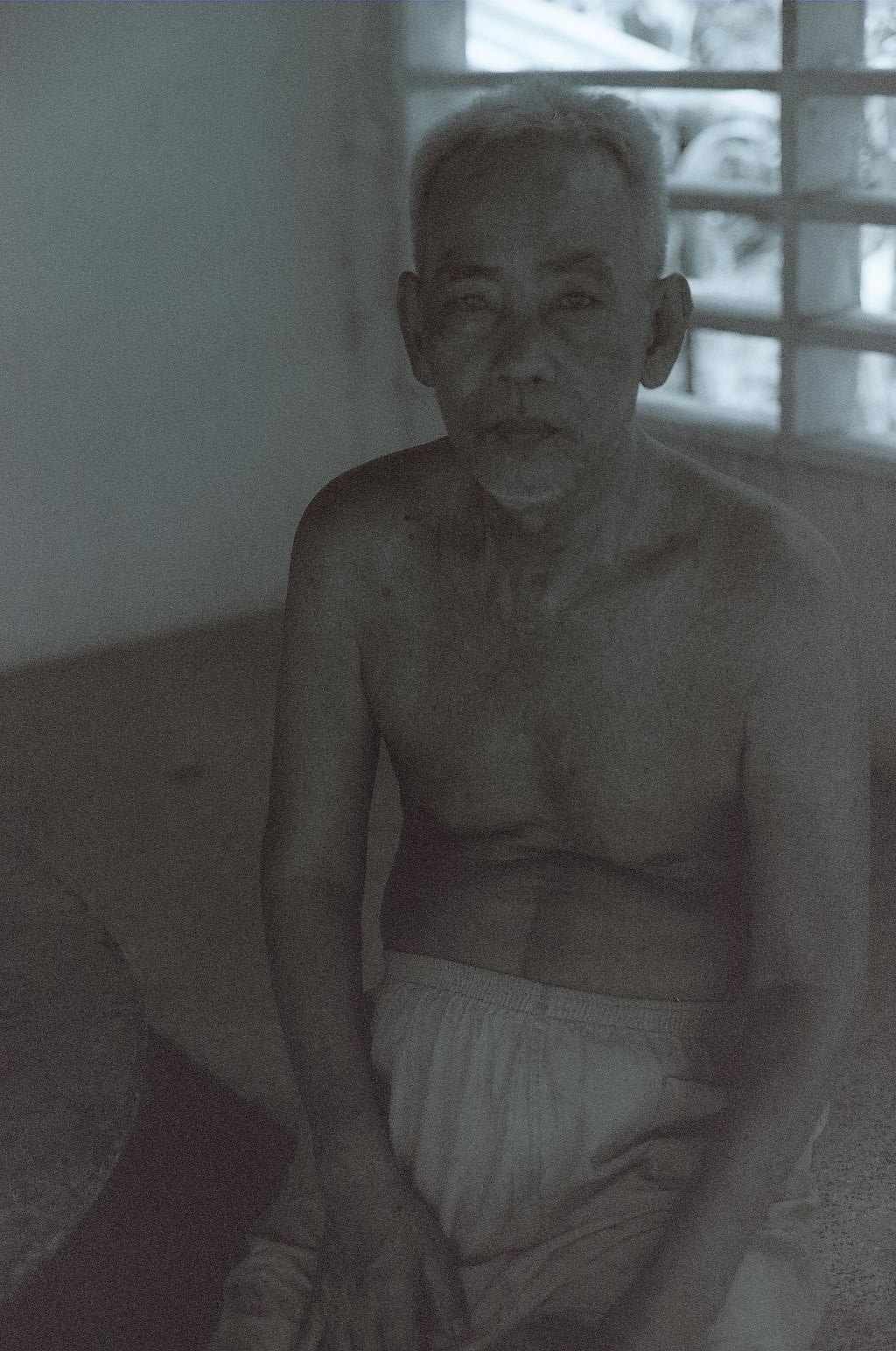 But it makes no sense to view photography from an entirely technical, pragmatic, or even financial standpoint because photography is about expression and communication. It liberates the common pitfalls of focusing on megapixels, auto-focus point count, and the ever-deadly Gear Acquisition Syndrome (GAS) that many fall prey to (myself included). Film is perfect because it’s not meant to be “improved” on. It knows exactly what it’s capable of and delivers only that. In a world where smartphones can offer images that are realer than reality, film delivers an emphatic f@ck you to the entire trend and goes about its merry way, and that’s why those that experience film are entranced by it. 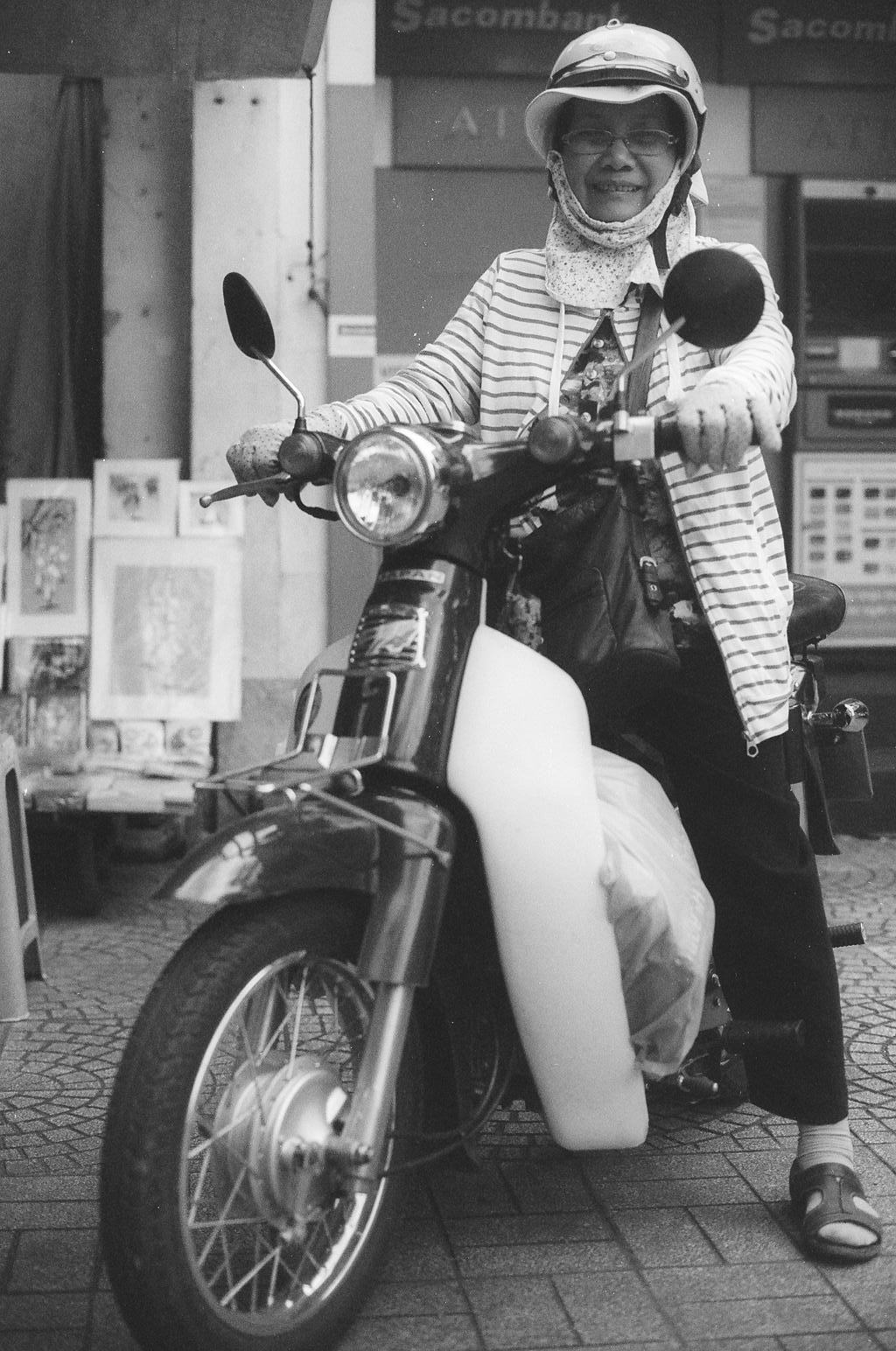 A More Flattering Shot of Mom

Like exercising, choosing to shoot film is strenuous, but the reward at the end always outweighs the struggle. In today’s busy world, the impulse to immediately share one’s adventure can be extremely tempting (the positive reinforcement effect of Instagram likes are no joke). However, film forces you to stifle that immediate gratification, and as the old colloquialism states: good things come to those who wait.

View all posts by tthien29

1 thought on “Why I Love Film: Olympus OM-1 in Tokyo, Thailand, & Vietnam”